Katie Coughlin    Beer Canning    January 19, 2015  |  0
Last week’s blog focused on the canned beer revolution that is taking over the craft beer market and in this writer’s humble opinion, is a very good thing. What I would like to hone in on this week are two recent advents that are taking place in the craft beer and hard cider industry that are moving the canned revolution along to breakneck speed. Those two things are a.) Mobile Canning and b.) printed shrink sleeved cans.

Today many craft breweries – in hopes of expansion and additional revenue streams – have begun distributing their products to be sold in retail stores. Many have turned to bottling their beers. But canning is coming along quickly. And if Andrew McLean and Scott Richards have anything to say about it, canned beer couldn’t overtake bottles soon enough.

McLean and Richards are the proud co-owners of Michigan Mobile Canning. What is Mobile Canning, you may ask? Well I’m glad you did. Mobile Canning involves two people, a box-truck and a canning line that can be wheeled into said box-truck, out of said box-truck and into any micro-brewery who perhaps doesn’t have the floor-space and/or capital investment to justify purchasing a canning line of their own. No problem, says Michigan Mobile Canning – they drive from micro-brewery to micro-brewery, in their box truck with the canning line in the back and are able to set-up the line, tap into the fresh batch of brewed beer and can to order. Some runs may only consist of a hundred or so cases of cans (24 cans/case). Other runs may be for as many as 25,000 to 30,000 cans at a time. As long as the beer is cold (which helps the lines to flow that much better), Scott and Andrew have the process of canning beer down to a science.

In fact they are growing so fast in the states of Michigan and Indiana that a second box-truck and beer canning line are in the plans for early 2015. Michigan Mobile Canning (MMC) is fielding calls from breweries that they never would have expected to hear from before. To that point, I had the chance to go meet Andrew and Chris – who also works for MMC – at Millking it Productions brewery in Royal Oak, MI. I walked into the production brewery as the canning line was chugging away, filling cans with beer, placing a lid onto the can, seaming the lid to the can and then sent down the conveyor to a packaging line where Kristy Smith was capping the cans into 4-packs and then packing into carton cases. Kristy is the owner and President of Millking it Productions (or MIP) and after finally saying enough was enough with her previous canning line (which she owned and ran on-site), she called up Michigan Mobile Canning and had them come in and can 3 different brands of her beers (AXL, SNO and BRIK – all great beers by the way). I watched as she shook her head in disbelief at the speeds with which the mobile canning line was able to produce final product.   Another satisfied customer… 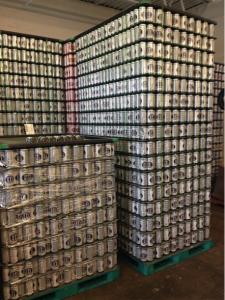 And so after 2 days at MIP and several cases of canned, cold, craft beer on its way to various retailers across Metro Detroit, the guys from Michigan Mobile Canning packed the line back into the truck and drove off to their next stop in Michigan City, Indiana. It’s been a banner year for MMC and 2015 is looking to be even better.

And if Mossberg & Co. and this article’s author have anything to say about it, 2015 will be the year that printed sleeved cans of beer take over the craft brewing industry. You may have read last week’s article on Mossberg’s website and wondered: why is a printing company blogging about beer? Well two reasons:

1. Beer is awesome – for that reason alone, I probably don’t even need to give a second reason, but since the rest of my article hinges on this next point…

2. Mossberg & Co. – already an expert printer of labels and packaging (amongst other proficiencies) – has invested in print and finishing equipment that will further aid the cause of canned craft beer that will lower the cost of entry for any brewer to get in the game of beer distribution by utilizing printed sleeved cans.

So let’s talk beer shrink sleeves. What are they? Why are they pertinent to this discussion? What is so special about them that we can make claims to change the micro-brewing industry?

Let’s first review traditional cans of beer. Most canned beer that you see in stores are all printed directly onto the can itself. Any craft brewer that wanted to can their beer would have to commit to purchasing a full truckload of cans (which equates to roughly 100,000 cans in the 16 oz. size) and then have to figure out where to store all those pallets of empty cans until they could be filled and shipped out. That’s not a problem for the big-boy breweries that mass produce beer. But fitting even 50,000 cans in a micro-brewery location that perhaps is already squeezed for square-footage can be a problem. Not to mention that they have had to pay upfront for 100,000 printed cans that they may really only need to fill 7,000 – 10,000 cans per production of that particular beer (depending on the size of their brewing barrel system). Having cash-flow tied up in 90,000 cans that would be used over the course of a year as opposed to only ordering what is needed for each production was a hurdle that micro-breweries previously had no way of getting around.

Well enter the advent of printed shrink-sleeved cans. Mossberg & Co. with our new Mossberg Beverage Marketing initiative has invested in a new HP digital roll-fed printing press that can produce printed rolls of shrink film in made-to-order quantities. Combine that with equipment that will convert those rolls into tubes which can then be dropped and cut – one at a time – onto a blank silver can and then sent down a conveyor line through a heat-tunnel that will shrink the film to size on the can, and you now have a solution for made-to-order beer cans. These investments were a sensible choice for Mossberg since they already operate FDA-approved print and fulfillment facilities and have the quality procedures in place to pursue this growing beverage market.

With the new HP press already on our floor and the rest of the equipment soon to land in early 2015, Mossberg will be positioned to offer any micro-brewery and/or beverage company a short-run to medium-run solution for getting beer into cans and with graphics that the traditional printed can guys can only dream of. Check out our very first sample can that will give you some idea of what kind of quality our sleeved cans will have: 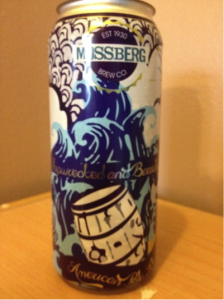 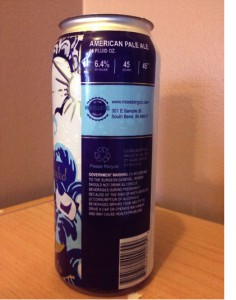 If you are a production brewery that currently cans some of your brands, but haven’t had enough demand to merit buying a full truckload of printed cans at a time for other brands of beer or would just like to produce a smaller seasonal batch of canned beer – Mossberg’s printed sleeved cans are an ideal fit for you.

If you are a micro-brewery or hard cider(y?) or other beverage company and have a barrel brewing system that can yield anywhere from 2,000 to 30,000 cans at a time – Mossberg’s printed shrink sleeves are an ideal fit for you too.

We see 2015 as the year in which companies like Michigan Mobile Canning & Mossberg Beverage Marketing further the advance in the CAN-volution!